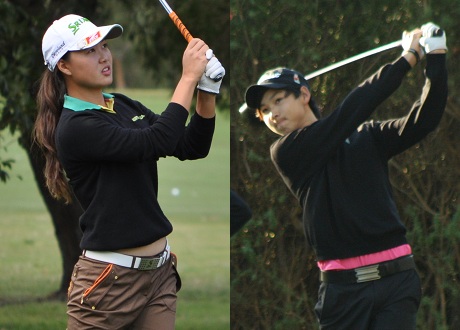 Minjee and Min Woo Lee have been awarded the Smarter than Smoking Junior Golfer of the Year Awards at GolfWA’s Junior Presentation Day at Joondalup Golf Resort.

It has been a year to remember for the Lee family and it is the first time that two siblings have won the titles in the same year.

While Minjee Lee cruised to her fourth straight award, it is a first for 15 year old Minwoo Lee who won eight titles this year. Lee had victories at the Srixon Junior, Drummond Golf 54 Hole Classic, WA Junior Amateur, WA Junior Matchplay as well as winning the 15 & Under Categories at the Aaron Baddeley International and the Greg Norman Junior Masters.

But Lee’s most impressive result may not have come from a victory but at the WA State Amateur, where the then 14-year old made it all the way to the final in a field of the State’s most experienced amateur golfers. Lee would drop the final to Brady Watt, who turned professional later in the year.

Minjee Lee’s fourth straight year as WA’s best Junior Golfer was highlighted by her wins at the Australian and Western Australian Amateur. Lee swept all records before her in a season where she was awarded the Ivie Temperly Consistency Award with an incredible stroke average of only 66.20.

Kathryn Norris would take the award after reducing her handicap from 25 to 10 over the course of the year. She was added to the Golf WA Junior Squad and had won three Nett awards at the WA State Junior Championship, Hartfield Junior Open and the Rockingham Ladies Open.In the Smarter than Smoking Junior Stroke Averages, Hannah Green (72.13) of Mount Lawley and Curtis Luck (71.30) of Cottesloe were the winners in the 17 and under Categories. Minwoo Lee (72.61) and Hira Naveed (75.50) won in the 15 & Under Categories, Fred Lee (74.12) won the 13 & Under and Cooper Geddes (82.04) won the 11 & Under.

To finalise the evening, the Junior Boys and Girls State Squads for 2014 were announced.