Lee paired with World No 1 Inbee Park in China 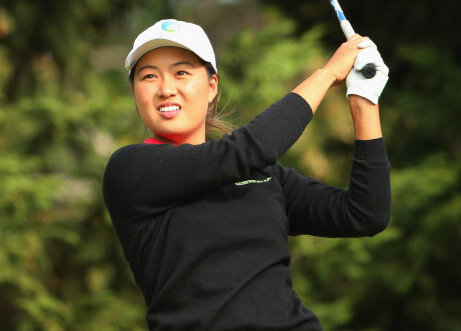 Talented teenager and World Number 1 amateur Minjee Lee has been paired with World Number 1 professional Inbee Park in another headline-grabbing week as she prepares to make her debut in the World Ladies Championship in China.

The Australian is the talk of golf after a string of impressive results, culminating in an astonishing six-stroke win in the recent Victorian Open, her first victory in a professional event.

Next she will go up against four of the game’s top-ranked players in the World Ladies Championship at Mission Hills Haikou.

But the prospect does not faze her. “I’d like to finish in the top five,” she confirmed. “That has been my goal for the professional tournaments I’ve played so far and that is what I’m aiming for this week.

Lee, 17, born in Perth to Korean parents, seems set for a stellar career. She won the US Girls’ Junior in 2012, then recorded back-to-back Australian Women’s Amateur titles in 2013 and 2014.

She recently finished second to Cheyenne Woods – niece of superstar Tiger – in the Volvik RACV Ladies Masters, then tied for 11th in the Women’s Australian Open, both of which were Ladies European Tour (LET) events.

Her first win in a professional event came 10 days ago at the Victorian Open, an Australian Ladies Professional Golf-sanctioned event in Melbourne.

In the World Ladies Championship, she will play the first two rounds in the same flight as current world No.1 Inbee Park of South Korea, winner of three Majors last year.

But the teenager – introduced to golf at the age of 10 by her parents Soonam and Clara – is taking it all in her stride. “The course is looking fantastic and I don’t think anyone could ask for anything better than how conditions are right now,” she added.

“This is my second visit to China, but first time at Mission Hills. I played in the Aaron Baddeley International Junior Championship in Guangzhou in 2010. I think I finished in the top 10, but it seems ages ago.

“The hospitality has been great since I’ve been here. Just the language barrier is difficult – I’m fluent in Korean but not Chinese.”

As well as Park, the field at Mission Hills Haikou includes the world No.2 and defending champion Suzann Pettersen of Norway, No.5 So Yeon Ryu of South Korea and the seventh-ranked Feng Shanshan of China, winner of the first World Ladies Championship in 2012.

Organised in conjunction with the China Golf Association and co-sanctioned by the China LPGA Tour, it will be the fourth event on this year’s LET schedule.