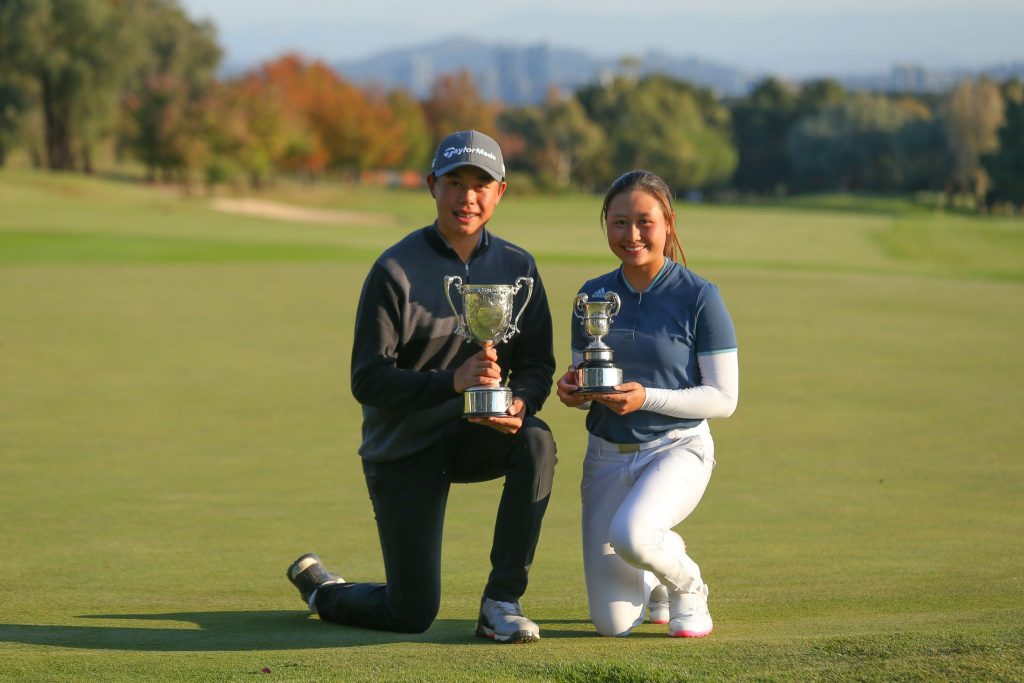 Their respective paths to the titles were very different, but Jeneath Wong and Jeffrey Guan are the new Australian Junior champions.

Wong, the pint-sized tyro from Metropolitan Golf club in Melbourne, made it a wire-to-wire result to win the Australian girls’ crown, cruising to a four-shot win at Gold Creek Country Club in Canberra today.

Her three-under total left her the only female in red figures for the week. Second place went to South Australia’s Amelia Whinney, who carded an impressive final-round 71 to go with her third-round 69, while third place went to the Gold Coast’s Haruhi Nakatani.

Wong was quietly satisfied with her win, saying after her round the Australian Junior title meant as much to her as her back-to-back Riversdale Cup crowns.

I’m really happy to win this after two Riversdale Cups in a row,” she said.

I was a bit all over the place today, I didn’t shoot my best, but I was happy to keep the lead.

Wong said she was thrilled to know her name now sits alongside some of the greats of Australian women’s golf, including Jan Stephenson and Minjee Lee.

She was also very aware the win had secured her a start in the next Women’s Australian Open.

I’m very excited to play with the pros. I’ll learn more stuff from them.

I’m really happy to see my name on the trophy, especially with Minjee Lee, one of my idols.

After starting the final round one shot behind, Guan, from The Australian Golf Club in Sydney, made a move early and was safely ensconced at the top of the leaderboard by the third hole.

At one stage during the final round, Guan led by five, however, some back-nine nerves no doubt played their part.

Yet despite a three-putt bogey on the last for a 70, the 16-year-old had a sufficient buffer to claim the crown by a shot from fast-finishing West Australian Aldrich Potgieter, who roared home with a 67.

Nicholas Siegmund, playing alongside Guan, grabbed third place with a final-round 72 to sit two strokes further back at three under, while Toronto’s Jake Riley (73) and overnight leader Jye Halls (77) finished tied for fourth at two under.

Guan, however, was the man of the moment, and in his typically reserved way was happy to claim the Australian Boys’ crown after being runner-up at the Aussie Amateur in Adelaide in February.

I just wanted to shoot a couple of good rounds, and I got there,” he said.

No over par rounds this week.

Guan admitted getting to the lead as quickly as he did wasn’t entirely to plan, but he was still happy to have grabbed it so rapidly.

It was non-intentional, but the second and third holes gave me momentum, before I slowed down at the end.

The national junior crown has capped an extraordinary run for Guan, who said his performances over the summer, including winning the NSW stroke play title, had been encouraging.

What can I say? I’ve played really nice, really good to be honest.

Like Wong, Guan’s win secured him a start in this year’s Australian Open which, should it occur as hoped, will be at The Australian.

I’m looking forward to it, definitely. Home-course advantage – let’s see if I can get Dad on the bag and see what happens.