Women’s Pennants ends with a bang

Women’s Pennants season went out with a bang over the course of last weekend. The Division One final kicked things off on Sunday at the Mandurah Country Club and was followed by the Division Two and Three finals on Monday, both played at the Wanneroo Golf Club.

The Division One final saw yearly Women’s Pennants powerhouse Mount Lawley take on Lake Karrinyup for the title. After not losing a match for the season, Mount Lawley flexed their muscle in Sunday’s final to take a powerful 5.5-1.5 victory. The match started well for Mount Lawley, winning the first four matchups. Sheridan Clancy, who recently verbally committed to American college Texas Christian University, then squared her matchup with Erina Tan. Jennifer Herbst then won the last matchup but the damage was done early as Mount Lawley returned as Division One winners.

The Vines were the surprise packets of the Division Two season, finishing second behind a Joondalup team packed with GolfWA High Performance players. However, it was Joondalup who proved too strong on Monday, becoming the second team in this year’s Women’s Pennants season to go through undefeated. The Vines found themselves 2-1 up through the first three matchups, however Joondalup stormed home to a 5-2 win, powered by HP players Madison Large, Amie Phobubpa and Mia Lawson.

The Division Three final closed Monday’s proceedings at Wanneroo with the tightest of the three finals. in a season where only four teams featured in Division Three, Nedlands and Melville Glades found themselves in the final after very different seasons. Melville Glades won both matches they played and were forced to halve the third due to rain. Nedlands scraped into the final due to a better differential over the WAGC. The two teams hadn’t met before Monday due to the rained off Round 1 at Gosnells. Melville Glades took the first matchup courtesy of Lynda Wake’s 5&4 win over Nedlands’ Veni Tang before “Neddies” took the next two and a 2-1 lead. Alison Hoy scraped through on the 19th to square the match before Rhonda Moore put Nedlands again in front heading into the final two matches. Melville Glades held their nerve when it counted most however through wins to Helen Constable and Leanne McVey to take Division Three for 2022. 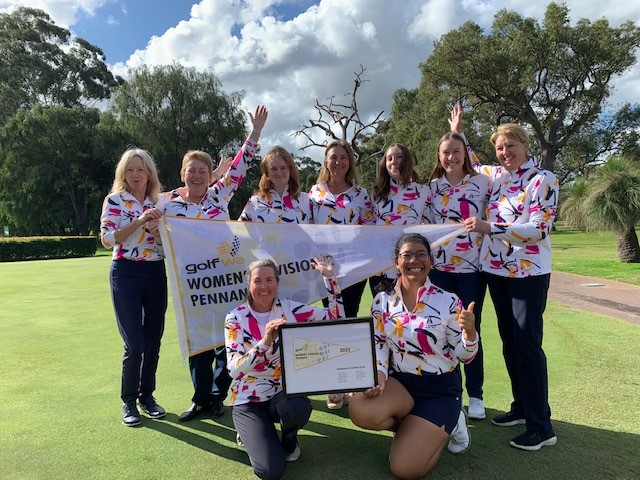 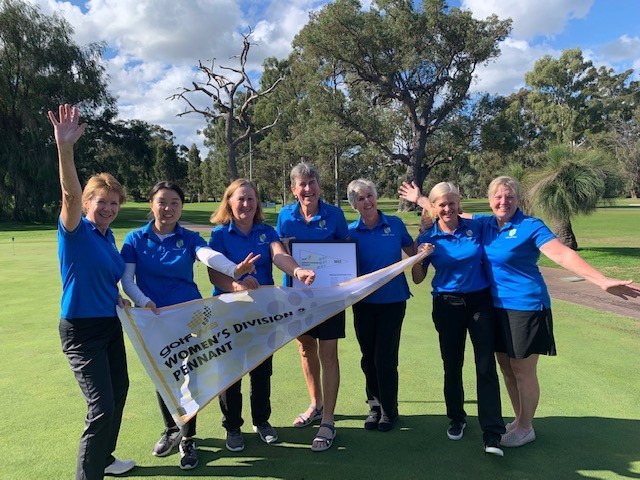 Divisions Four through to Six were decided by the table this year, meaning it was all to play for throughout the regular season.

Division Four finished with WAGC on top, meaning they take the title in a tight race that was decided by only one point. Royal Fremantle were second place in that race and may rue their missed opportunity to take a lead on WAGC, when they squared their matchup with the eventual division title winners in their Round Five match. Lake Karrinyup followed closely in third, with Royal Perth in fourth. Lakelands, Wanneroo and Mount Lawley made up the minor placings, finishing fifth, sixth and seventh respectively.

Royal Fremantle made up for their Division Four disappointment by cruising to the Division five title. They finish with the largest for/against differential on their way to an undefeated season. Cottesloe and Gosnells battled it out for second and third, with the former scraping home for the silver. Melville Glades and Sea View followed closely in fourth and fifth. Whilst, The Vines and Joondalup languished at the bottom of the table, both finishing the season without a victory.

Finally, Division Six saw perhaps the tightest finish to a Pennants season we have seen in recent memory. WAGC and Royal Fremantle were separated by just half a match as you can see through the link below, with WAGC coming out on top by the skin of their teeth. Cottesloe had the best view of the top of the table as they finished third, one point ahead of Wanneroo in fourth. Nedlands again followed closely, another point back in fifth. The Vines and Lakelands were also only separated by only half a match to decide the bottom two placings in Division Six.

To take a look at the full results from this year’s Women’s Pennants, click here.