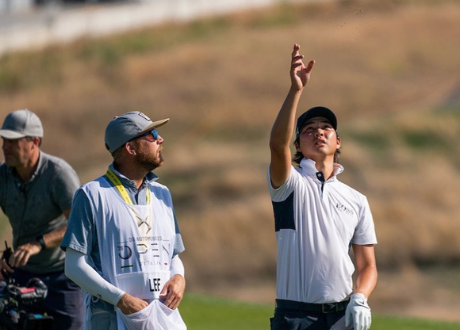 Min Woo Lee heads into the weekend at the 2021 DS Automobiles Italian Open with a two shot lead after the Australian followed up Thursday’s 64 with a 68 on day two in Rome.

The 23-year-old from Perth began the day in a three way tie at the top of the leaderboard but carded four birdies and a single bogey on Friday to get to 10 under par and establish his first ever 36-hole lead on the European Tour.

Lee has a high quality chasing pack sitting just two strokes behind him, though, with last month’s D+D Real Czech Masters champion Johannes Veerman, Tommy Fleetwood, Mikko Korhonen and Adri Arnaus in a tie for second on eight under.

Henrik Stenson and home favourite Edoardo Molinari were then among the large group another shot further back.

Lee began his second round with a birdie from inside five feet at the first but gave the shot back at the sixth hole.

He bounced back with a chip-in birdie on the short seventh before holing from close range for another birdie at the ninth to get to nine under and grab a share of the lead.

There was then a big swing at the top of the leaderboard as Lee birdied the 12th to move into double digits under par and Kalle Samooja dropped two shots at the fourth hole to give Lee a two shot lead.

Lee came close to getting a bonus birdie at the 14th when his chip from the bank hit the hole, but it did not drop and he had to settle for a par there.

He set up another chance with a brilliant tee shot at the 17th but could not convert his 15 foot birdie putt.

And the two time European Tour winner made another par at the last to head into the weekend on ten under.He said: “Very solid. I made nice putts coming down the stretch.

“I’m happy to be in the lead with two rounds to go.”

With wet weather set to arrive at Marco Simone Golf & Country Club over the weekend, Lee is relishing the challenge.

“I’m not sure how it’ll play wet,” he added. “But I’m looking forward to the challenge.”