After a superb bogey-free four-under-par 66 in the morning session gave Potgieter a seven-up lead, Bairstow, 23, mounted a superb comeback to claw back to two down with four to play.There were echoes of Laird Shepherd’s comeback from eight down at Nairn last year, but Potgieter displayed a maturity beyond his years and an exceptional short game to seal a memorable win on his first-ever visit to the UK this summer.

“It’s really amazing,” beamed the young winner. “I can’t really find the words, there’s no feeling like it and I haven’t felt this good before. The words can’t even come out of my mind.

“On this golf course, going bogey-free on the first 18 holes was incredible for me. I played really well and everything worked out well. I knew Sam was going to do better than he did this morning. He didn’t play too well, but I knew he was going to come out strong. He wasn’t going to give up. I just had to play steady and keep my lead”.

Potgieter, placed 140th on the World Amateur Golf Ranking® (WAGR®), can now look forward to competing in The 150th Open at St Andrews next month, the 2023 US Open and, by tradition, an invitation to play in the Masters Tournament.

The teenager, who joins a roll of honour that also includes José María Olazábal, Sergio Garcia and Romain Langasque, will also be invited to play in an event on the DP World Tour.

Potgieter added, “I’m really excited. I played the Old Course recently (in the Links Trophy) and it was really amazing. I think the course is going to get in better shape so I’m really looking forward to that.

“At the beginning of this week, I just tried to make the cut, make the match play and went from there.

”In front of large crowds in breezy conditions, Potgieter became only the third South African to triumph after Jovan Rebula at Royal Aberdeen in 2018 and Bobby Cole at Carnoustie in 1966.

Bairstow, the leading Great Britain and Ireland player this week at 19th on WAGR®, was bidding to become the first left-hander to win The Amateur in the modern era.

From a 288-man starting field representing 42 countries, the finalists played out an epic contest. Bairstow’s bogey at the 2nd gave Potgieter the early advantage and he doubled his lead after a birdie at the 3rd. As the Englishman struggled to settle, he made two further bogeys at the 4th and the 6th as Potgieter eased four-up.

“It’s really amazing. I can’t really find the words, there’s no feeling like it and I haven’t felt this good before.” 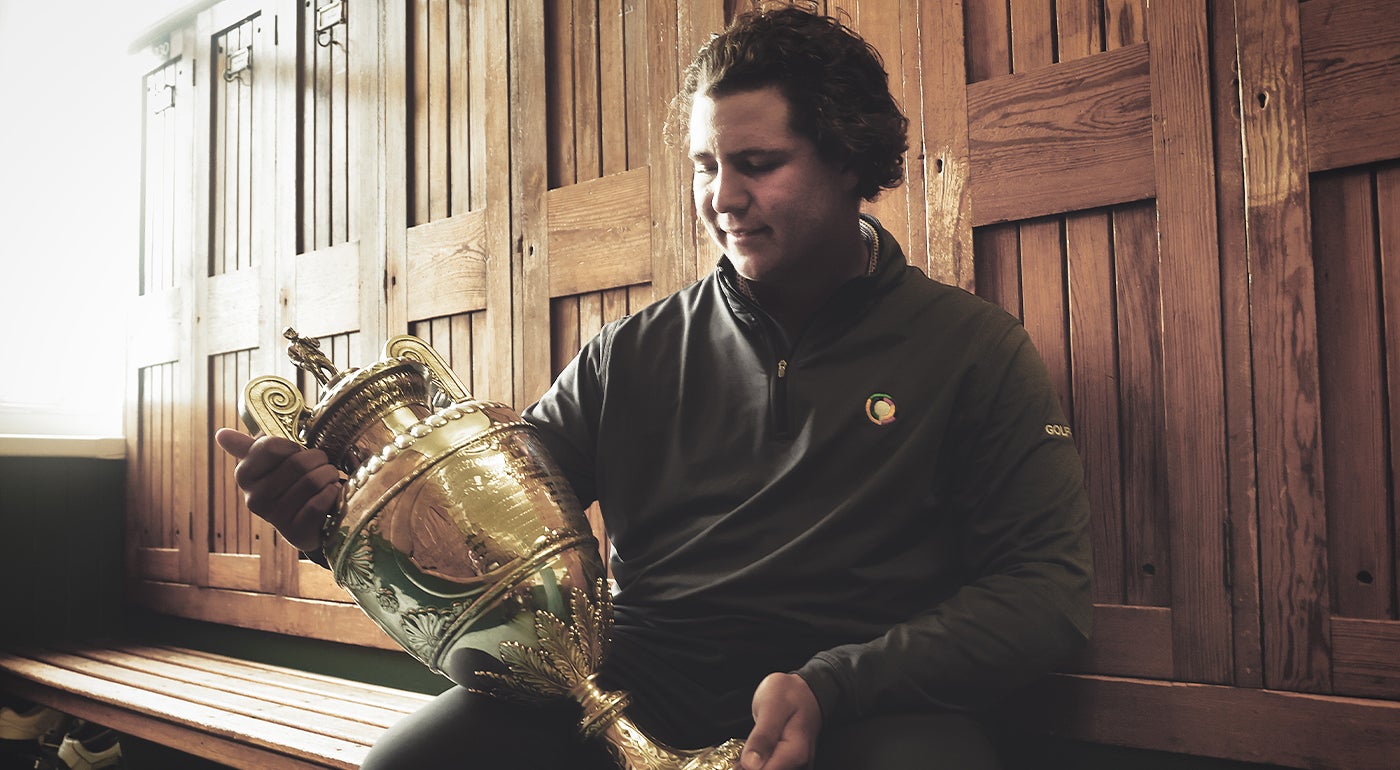 After a delightful approach to the short 9th, the South African rolled in the short putt to go five-up.

Potgieter looked in trouble on the par-5 11th after pulling his drive but he drilled a brilliant, low approach and won another hole as Bairstow fluffed his chip. Given Potgieter plays at Pinnacle Point on the southern coast of South Africa, he is well used to keeping it low in the wind.

It was seven-up to Potgieter after Bairstow bogeyed the 12th but only his second birdie of the day at the 13th gave him hope. The Hallowes member continued to battle, sharing the next four holes, but he was bunkered off the 18th tee and found himself seven down at halfway.

That was the same score that Shepherd found himself down to Monty Scowsill last year before launching an extraordinary comeback that saw him triumph at the 38th.

An errant tee shot from Potgieter at the 21st saw him make his first bogey, allowing Bairstow to win just his second hole and reduce his arrears to six down. The South African, a three-time winner at junior level in his homeland this year, hit another poor tee shot at the 22nd only to rescue a vital half with a 10-foot putt.

“With all the crowds here, there’s a lot of people I know, and that spurred me on a bit this afternoon. I just couldn’t get it all the way back. I was a bit emotional at the end with everyone cheering but unfortunately I couldn’t do it for them.

“But I suppose growing up, if you had said to me, ‘Would you ever reach the final of The Amateur? I’d say, ‘no’. It’s quite special.

”The R&A provided live broadcast coverage of the quarter-finals, semi-finals and Final on The R&A’s website and its YouTube channel – and will do so again next week for the Women’s Amateur Championship at Hunstanton in Norfolk.

After record entries for this week’s Championship at the 11-time Open venue and near-by St Annes Old Links, next year’s staging is at Hillside and Southport & Ainsdale.