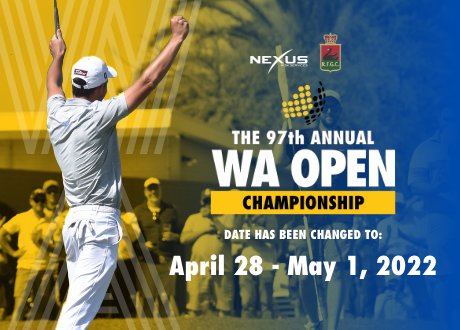 Due to the current border restrictions in place for Western Australia, in discussions with the PGA Tour of Australasia, it has been decided that the 2021 Nexus Risk WA Open which was to be held in early December, will be postponed to April 2022. For the same reason, the 2021 City of Kalgoorlie Boulder WA PGA Championship presented by TX Civil & Logistics which was scheduled to be played in Kalgoorlie the week prior to the WA Open, has also been rescheduled to April 22.

“Whilst it was very disappointing to have to reschedule the 2021 Nexus Risk WA Open for a second time, the Board of GolfWA along with the PGA Tour of Australasia are committed to the WA Open delivering an event that will attract players from all over Australia and unfortunately the current border rules will mean many players from other states would not travel for either the WA Open or WA PGA Championship. With the Nexus Risk WA Open now rescheduled for Thursday April 28 – Sunday May 1, 2022 we are very confident that an outstanding event will be held at Royal Fremantle Golf Club”.

With the changing of border restrictions around the country, the PGA Tour of Australasia has today announced its revised schedule for its Summer of Golf. Which you can find here.