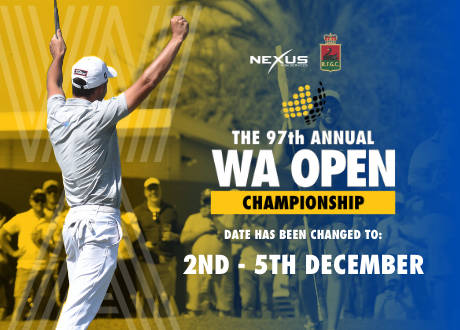 After continual monitoring of WA’s border restrictions and many discussions with all stakeholders, GolfWA along with the PGA of Australia, announce today that the WA Open will be rescheduled from it’s original date of the 14th – 17th of October and will now be held from the 2nd to the 5th of December.

Both bodies were disappointed to have to make the decision, however they feel that it is the right one to make, citing public health and potential difficulties around players from eastern states having to quarantine before the tournament.

Postponing is a logical decision given the current status of border closures in Australia and will give us a far greater opportunity for players to be able to participate in both the Nexus Risk WA Open at Royal Fremantle Golf Club and the PGA Championship in Kalgoorlie, answered GolfWA Chief Executive Gary Thomas when asked about the postponement.  We are also delighted that despite this postponement, Royal Fremantle Golf Club are still able to host the event and Nexus Risk Services have re-confirmed their involvement as Naming Rights Sponsor.

Some of Australia’s greatest golfers have won the WA Open including Greg Norman, Ian Baker-Finch, Terry Gale, Stephen Leaney and Graham Marsh. We are hopeful that pushing back the date allows reigning champion Hayden Hopewell to defend his title against the best talent that the country has to offer.  The WA PGA Championship will be held the week prior to the Nexus Risk WA Open and thus ensures that WA will have two major tournaments back to back.