State Foursomes to take The Vines by storm 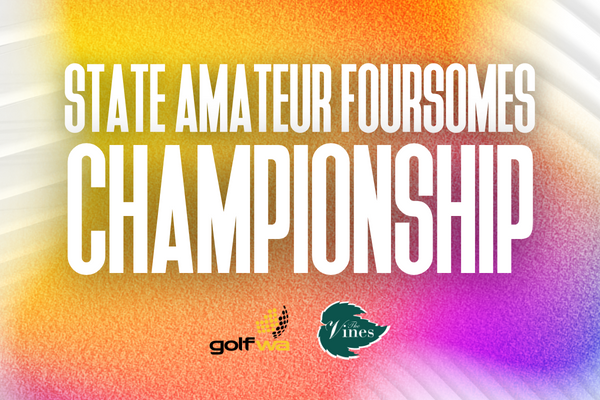 The State Foursomes championship will be held this weekend, Sunday the 7th of August.

The tricky foursome’s format will be battled out over 36 holes at The Vines Golf and Country Club.

The undulating greens that The Vines possesses could have people leaving their partners in tricky positions and scrambling to make par.

The event running since 1927 has a prestigious list of winners including the likes of three-time winner and newly crowned English Amateur champion Abbie Teasdale. The 2014 winners were Min Woo Lee and Haydn Barron.

Last years winner Ryan Peake has gone pro in the year that followed his foursomes win with Jose De Sousa.

The Foursomes format offers a different challenge to what golfers are normally used to. The alternate shot format requires communication, teamwork and occasionally pulling your teammate out of a bad spot with a ridiculous recovery.

There are some elite pairings in the mix on Sunday as they look to take home the title.

2022 Women’s State Amateur Medalist and Two-time winner Kathryn Norris will pair up with Charlotte Hicks in hope of taking out her third and Hicks first title.

Some of the other women’s pairings include the duo from Mt Lawley of Ruby Cotton and Amanda Gan. Both have performed well recently in junior events but will be looking to utilize the bond created during their successful pennants campaign in Division 1.

State squad teammates Sheridan Clancy and Jorja Hinson-Tolchard will create a formidable team and hope to carry their success from the Interstate series together into this weekend. Don’t be surprised if these two names are etched in on Sunday afternoon.

The Men’s side of the draw also has some strong pairings that will put their case forward on Sunday.

Josh Greer will pair up will Joondalup teammate Lachlan Hall. Having both won their matches against Royal Fremantle on Sunday in the men’s Division one final, they make for an in-form pairing. The left-hand and right-hand combination could prove a masterstroke if they pick suitable holes.

Another pennant winning duo will team up in Jordan Jung and Silvester Tan. Having played number one and number two in the recent pennant final they both come into the weekend in hot form. The boys from Royal Perth will be no doubt trying to take the title back south of the river come Sunday afternoon.

It shapes up to be a great event, watching some of the state’s best amateurs fight it out together in one of golf’s hardest formats. With rain forecast, it should add another degree of difficulty to the day. The first Groups are away at 7:20 am and the public is welcome to come and watch.