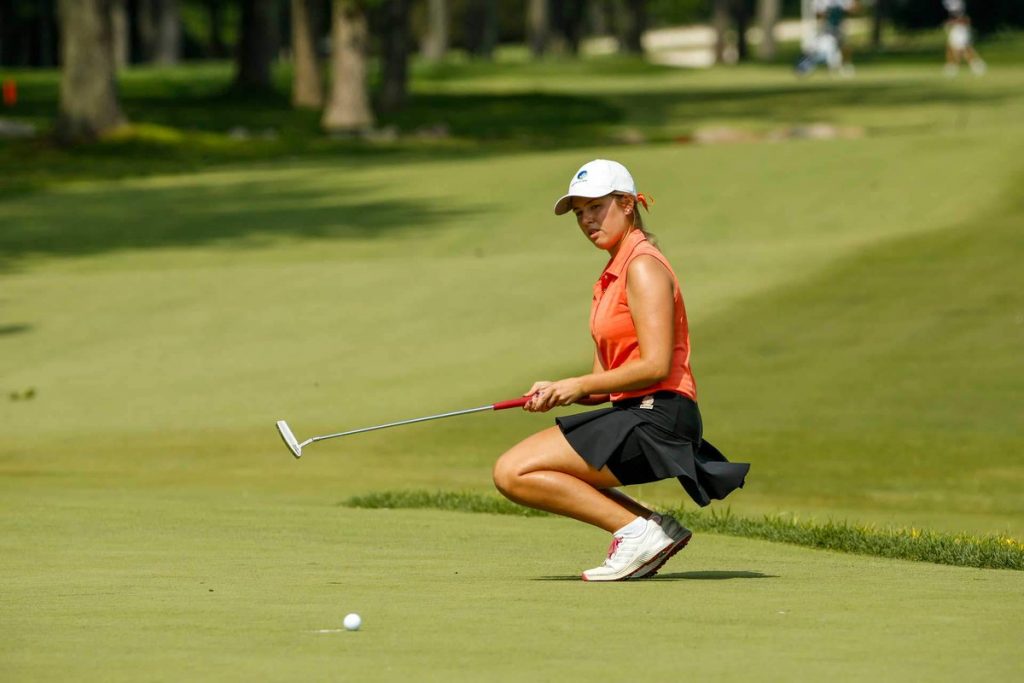 Maddison Hinson-Tolchard is daring to dream at the Women’s Amateur Asia-Pacific Championship at the Abu Dhabi Golf Club this week.

Just like every other golfer Hinson-Tolchard has always imagined what it would be like to play in the majors and to grace the hallowed turf of Augusta National.

Unlike every other golfer, she has the chance to make her dreams a reality as this week’s winner is granted exemptions to The AIG Women’s Open, The Amundi Evian Championship, Hana Financial Group Championship and the Augusta National Women’s Amateur.

“I’ve had my sights set on trying to get into Augusta since the summer tournaments back in July so I’ve been working towards that and I feel like I’ve been in a pretty good spot over the last couple of months to give myself an opportunity,” Hinson-Tolchard, who attends Oklahoma State University and is the highest ranked member of the Australian team at 186 in the World Amateur Golf Rankings, said.

“To win this and guarantee that exemption would be awesome, and obviously getting the two majors as well. I’ve always dreamt of playing in a major and to get into that would be pretty awesome.”

2021 has been a breakthrough year for the 2018 Australian junior champion as she claimed her first victory in the United States at the prestigious Southern Amateur in Florida and played a key role in the Oklahoma State Cowgirls’ best ever result in collegiate golf – a runner-up finish in the NCAA national final.

Despite her good form, the West Australian is not placing any pressure on herself in Abu Dhabi.

“There’s not any expectations that I’m placing on myself. Obviously I want to do well. A top ten would be great, that would be awesome,” she said.

“With all the experience I’ve had at college over the last year, and especially the tournaments I’ve played over summer, I feel like I’ve been in pretty good form. And I’ve been doing a lot of work on my swing and my game so I think I’m ready to go out there and produce a pretty good score and get myself up there.”

In order to do so, she will have to quickly adapt to Abu Dhabi’s hot and humid conditions – which are in stark contrast to the recent weather of Silverwater, Oklahoma where she attends college.

“We had a bit of a cold week last week which was not fun. I’m not built for the cold weather so I wasn’t enjoying that. Knowing that I was coming over here and going to be in the warmer weather was good,” she said.

“One of the mornings when we were going to workouts it got down to one degree, and no kidding, three weeks ago it was up around 37. It was stinking hot a couple of weeks ago and the change happened so quickly! One of the days we had a high of seven, it was so cold. It was awful!”

The warmer weather is reminding Hinson-Tolchard of home, but not as much as being around Australian accents once again.

At collegiate tournaments this year, she has had a taste of home when spending time with fellow members of this Australian team June Song (Iowa State University) and Isabelle Taylor (Oregon State University).

Although this week being with teammates Song, Taylor, Cassie Porter and Kelsey Bennett, along with Australian support staff, is like being back home again for Hinson-Tolchard.

“It was so nice last night sitting at dinner and being surrounded by the Aussie accents again,” she said.

“I haven’t really had that in a proper year, just being around a heap of people with the same accent as me. I’ve sort of gotten used to the American accent but it’s just nice to hear familiar voices.”