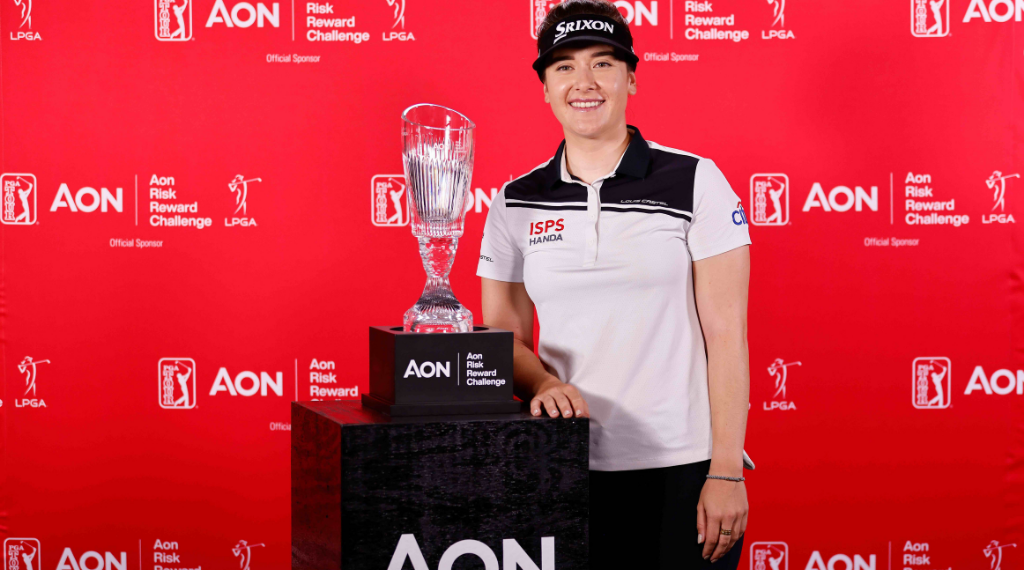 No one can wipe the smile from Hannah Green’s face this week as the Australian LPGA star received the biggest day of her career as the winner of the $1 million Aon Risk Reward Challenge.

“I haven’t even made that much money over two seasons,” Green said with a laugh at her press conference this morning.

The Challenge rewards the player with the best scoring average on designated risk reward holes at 24 tournaments throughout the season and many were surprised to learn that the softly spoken and polite West Australian has been the most aggressive risk-taker.

“I try to be aggressive when I’m on the golf course. I feel like that’s where I can show that side of me,” Green said.

“I thought this was a great concept and to be able to showcase it every week was really cool.”

Most of the risk reward holes were par-5s and Green – who added extra distance to her game this year – took full advantage by birdieing 72% of those holes and making eagle on another 10% to average nearly a shot under par for the challenge.

She secured the inaugural Aon trophy and the prize money at the BMW Ladies Championship in Korea by reaching the par-5 11th hole in two and leaving herself with a tap in birdie.

“I’m not very emotional on the golf course, but that was a big moment for me and Nate (her caddy),” she said.

The $1 million has given the West Australian a golden opportunity to enter the property market, which is something she has been eager to do back home for some time.

“The market is so crazy in Australia. Every time I look online every house I like is under offer within two or three days. So when I return to Australia, after I’ve done my hotel quarantine, I’ll be looking,” she said.

“It’s actually quite difficult to buy a house in Australia, especially as a sportsperson with not frequent income as well as foreign income. It is life changing in that I could not even have a mortgage so it’s setting me up for after I finish playing golf.”

The Challenge ran across both the LPGA Tour and PGA Tour with equal prize money for the men and women and winner Matthew Wolff was delighted to be earning the same amount as Green.

“At the end of the day it doesn’t matter where you’re playing, what tour you’re on, what course you’re on. The decisions that you have to make, you have to really think them through. You have to make the correct decisions as I did and as Hannah did,” Wolff said.

“We made them at the right time. Aon picks the holes because it’s a risk reward challenge. The critical thinking that we did in that moment deserves a prize like that and at the end of the day, I’m really happy that Hannah and I are making the same amount because they are the same decisions.”

Green was also delighted that pay equity was a central element of the challenge.

“For Aon to actually do this, not just talk the talk, but to present this for us on the LPGA Tour, we’re very grateful,” she said.

“It’s such a life changing thing for us players and it gives me a little bit of comfort when I come back out to play every season so I’m very grateful.

“I hope it continues, not just for this challenge, but for us players to be able to compete for million dollar cheques.”