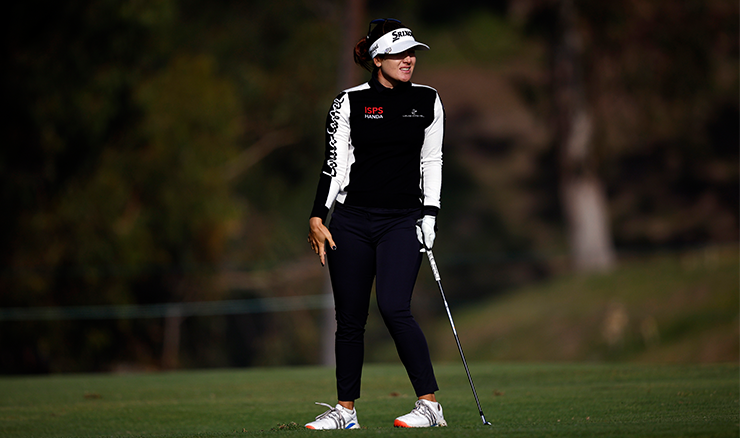 Hannah Green says storied Congressional Country Club will play tough for the KPMG Women’s PGA Championship this week, but she is up for the challenge.

The Australian, who won this tournament in 2019 to become just the third-ever female major winner from this country, spent time at the course in Bethesda, Maryland, recently trying to find a way to play it and taking in the nuances of what she called an “iconic venue”.

She is one of seven Australians teeing it up in the event, where the prize pool has been doubled to $US9 million by the PGA of America.

“It’s going to be hard,” Green said today. “It’s a long course. I think I’ve overheard maybe 6800 (yards), but, again, we’re getting forecast rain, so perhaps they’ll push it forward. It’s a long course. It’s a tough course. You really have to pick where you miss it because you are going to mis-hit shots out here. It’s just that hard. I’m really looking forward to it. I came here a couple of weeks ago and played some rounds, so I feel like I’m ready, so I’m excited to get going.”

The 25-year-old Green, ranked 21st in the world, was delighted with the PGA’s decision to increase the prize pool exponentially. It is almost three times what it was a decade ago, and the winner will receive $US1.35 million.

“It was amazing, all of us were in the clubhouse eating lunch when I heard the news, so we all were just talking about it,” said Green. “We’re not surprised. KPMG and the PGA of America have been so great elevating this championship. We’re really excited to be here and hopefully it’s a good showcase for this tournament.”

Green has had a solid 2022 season with five top-10 finishes, but no wins, and she has identified a potential game-changer. “I think what’s been letting me down is my short game. I feel like the last few weeks that’s what I’ve been working on a little bit harder.”

World No. 3 Minjee Lee will join Green on the top line of Australian chances this week in a field that includes all the best players in the world. The other Australians are Su Oh, Sarah Kemp, Katherine Kirk, Sarah Jane Smith and Steph Kyriacou. The Australians gathered for dinner earlier in the week with legendary Karrie Webb in town as well, and Green acknowledged the teamwork that happens among the group.

“We’re very fortunate that we’ve had such a great association (with Golf Australia) helped us as an amateur, and it’s really nice to see that Minjee, myself, Su, Steph , all the girls on tour who have been through the program out here playing on tour, and I quite often get asked how many Australians are on tour.

“I hope that number keeps increasing and there are more out here. I think this is a good golf course because ball-striking is important, and I feel like most of us Australians are pretty good at that. I would love to see any Australian lift the trophy this week, but hopefully I can!”