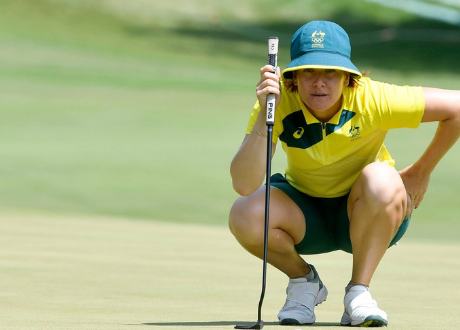 Following on from her 6-under 65 on Thursday, the 2019 Greg Norman Medal winner used a run of four birdies in the space of five holes to post 4-under 67 on Friday to join New Zealand’s Lydia Ko (66) in a share of third position at 10-under par.

It was a difficult day for Green’s Aussie teammate Minjee Lee, the world No.8 opening with consecutive bogeys and dropping three further shots on the back nine in a round of 2-over 73 that saw her fall into a tie for 34th.

World No.1 Nelly Korda (69) leads by three strokes through 54 holes with India’s Anditi Ashok (68) in outright second at 12-under as questions remain as to whether the tournament will be completed in its entirety.

The looming threat of a typhoon has convinced officials to bring the final round tee times at Kasumigaseki Country Club forward by one hour to 7.30am AEST on Saturday with Mother Nature now to decide whether the tournament goes the full distance.

Operating on the assumption that she will have a full 18 holes to improve the colour of her Olympic medal, Green believes that a repeat of her previous two days play can upset Korda’s gold medal dreams.

“I’m probably going to have to shoot something similar to what I have the past couple of days, especially given Nelly hits it so long and there are some good opportunities for her coming in late,” said Green, who understands the pressure Korda is under having led wire-to-wire to win the 2019 KPMG Women’s PGA Championship.

“She’s the one that has the most pressure. She’s been leading the tournament the past couple of days. She obviously had a great round yesterday and it can be hard to back it up but I’m just happy that I managed to shoot under par again and hopefully I can keep that momentum into one more round.

“Five or 6-under for me could possibly get me a podium finish but I’m not going to think about it too much. I just want to try and post another good number and see what happens.”

For the second day in succession Green ended her round with a crucial par save at the last after hitting her tee shot into the left rough.

Following on from her birdie blitz on the front nine, Green moved into medal contention with a birdie at the par-4 15th, her birdie putt at the 16th pulling up just centimetres short of the hole.

A second chance to move to 11-under slipped by on the right side of the hole at the short par-4 17th and then her clutch up-and-down at the last kept her at 10-under and tied for third, her game plan for the final round a simple one.

I just want to play as boring a golf as possible,” said the 24-year-old.

“I want to hit every fairway and every green and give myself the best opportunity to make birdie.

“My greens in reg has gone up since the first round – I would hope so given I only hit eight the first day.

“I looked at Nelly’s stats and she’s hit nearly 90 per cent of greens in the first two rounds. If you can do that you’ve got a good shot at going low and jumping up the leaderboard.”

Nine shots out of medal contention, Lee accepted the reality of her situation after a disappointing third round but will take a positive mindset into Saturday’s final round.

“Obviously I’m disappointed not being closer to the lead but I’m really having a good time,” said Lee.

“I’ll just play to the best that I can. As long as I’m committed to each shot and going through all my processes I can’t really complain.

“Nelly is way too far ahead and medalling is not even on my radar so I’ll try and just get some momentum into next week (Ladies Scottish Open) and the British Open.”

Golf News
Memberships soar around the country and at home

Golf News
Lee not afraid of being the big fish