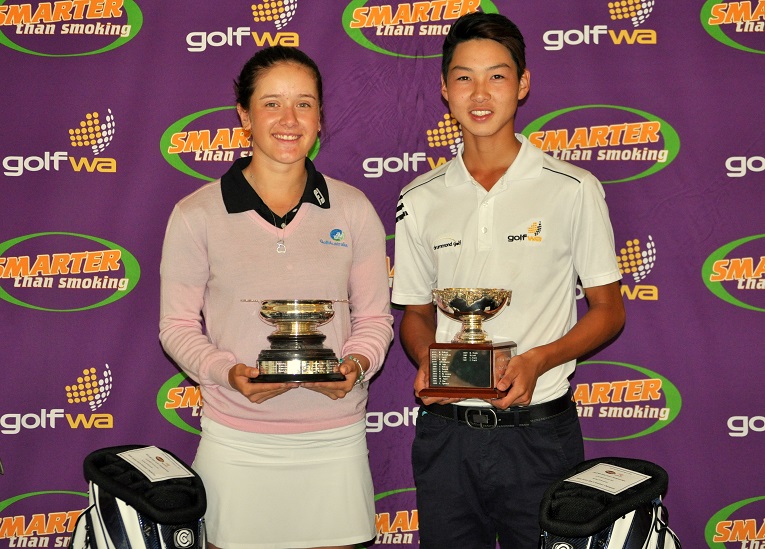 Both state champions had resounding victories with Lee finishing five strokes ahead of runner-up James Connor at 4-over and Green also winning by five over Alyssa Keir at Even par over 36 holes.

Green added the state title to a running list of victories in 2013 that included the Bowra & O’Dea 72 Hole Strokeplay, the Srixon Junior Championship as well as a runner-up at the Australian Girls Amateur and Lake Macquarie Amateur.

It’s been a busy period for Green who was recently playing in America at the Spirit International before returning home to play in Victoria at the Queensland Strokeplay and Dunes Medal in Victoria.

“I was feeling pretty confident today, it was just good to get home play some golf.” Said Green after the presentations.

Green carried through some late form that saw her finish 5th at the Dunes Medal after facing some very difficult playing conditions on the links course. “It was good to be back to less wind at Hartfield. Today was just about keeping the hydration levels up and eat plenty of food, then try to make every fairway and green and hopefully make the putt.”

Min Woo Lee was also coming off a similar busy period, playing three tournaments in two weeks with little downtime, taking him from China, to Victoria for the Dunes Medal and back home for the State Championship.

“It was tough out there today, I made a couple doubles early on the back nine in the second round, but I finished pretty strong. 36 holes in a day is tough but I was mentally strong so it was good.”

Lee will have some valuable downtime before heading to Queensland where he will compete in the Queensland Junior and Greg Norman Junior Masters.

“I’m pretty exhausted after the past two weeks, but it will be good to have a break before heading to Queensland. I feel good. my games going really well right now and I really want to keep that going, but there’s obviously a few things I’d like to improve as well.”