Davey gets his handful in Sand Green triumph 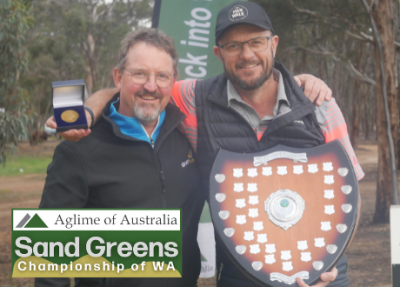 Busselton’s Adam Davey has won his fifth Aglime of Australia Sand Greens Championship of WA in a runaway 6 shot win. Although it wasn’t always looking like being that large of a margin. Davey holding his nerve late on the back nine to increase his advantage. Today’s equal course record of 69 consisted of only two bogeys and four birdies highlighting his high standard of play across his 18 holes. Davey came down the 18th and was greeted with a delighted crowd as he chipped his way onto the green. The high standard of play was befitting of the high quality tournament that the Narrogin Golf Club should be extremely proud of.

“It’s a great tournament, a lot of fun coming out and seeing these blokes every year, thanks Narrogin, see you in Augusta” said Davey after claiming his fifth title.

Ryan Peake came to Narrogin seeking a hat trick after winning the past two Sand Green Championships, however he was unable to overcome a slow start yesterday despite his 71 today. Peake had shown a strong form line leading in after taking out the State Foursomes Championship only a week ago at his home club Lakelands. Harvey’s Michael Lucas started strongly on Saturday but was unable to carry that form through Sunday finishing with a disappointing 80.

“My game never suited right doglegs and this course is full of them, it’s a tough little course”. Peake said, after rescuing a shot out of the rough.

Leading the pack that chased Davey hard all of Sunday were usual Sand Green suspects Rod Shemeld and Tim Gilotti. Shemeld playing an outstanding shot out of the rough on the 16th to save par and keep the pressure on Davey heading into the final two holes.

Adam Davey has now won the second most Sand Green Championship titles behind Royal Perth’s Michael Dennis who won six titles. Davey will look to tie that record next year when we head to Augusta on the 11th – 14th of August.

You can visit the August Golf Club website by clicking here.

GolfWA would like to thank Aglime of Australia for their continued support of the Sand Green Championship of WA, especially after announcing they will be continuing this support for a further two years.