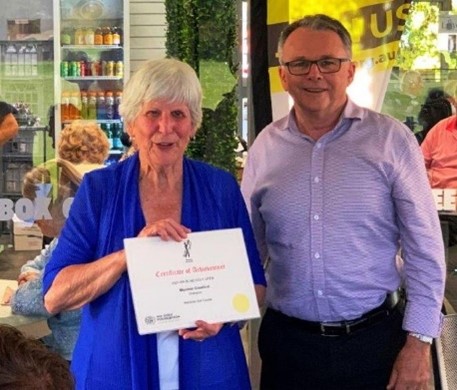 Approximately 15% of the world’s population, live with some sort of disability. International Day for People with Disabilities is held every year on December 3rd

with an aim to increase awareness of the daily struggles faced by people with disabilities.

To celebrate IDPWD, we’re highlighting a fantastic program that has seen blind golf in Perth go from strength to strength this year.

The Western Australian Blind Golf Association continues to improve the coaching and development on offer to blind golfers in the state. This year there was a nine month program held at the Lake Claremont Golf Club funded by the WA Golf Foundation which saw some fantastic results.

The program welcomed nine golfers this year, 5 ladies and 4 men. Each three hour Tuesday session was well attended and each of the layers saw a major improvement in their skills as a golfer.

“It’s great to see the WA Golf Foundation involved in such a fantastic program that promotes inclusivity amongst our game, the improvement seen amongst these players was enormous and their enthusiasm for the game is infectious”, added GolfWA Chief Executive, Gary Thomas.

Some highlights of this year’s Blind Golf season include a hole in one by Lorraine Manera in June on the 3rd hole at Lake Claremont. A Modified Team Ambrose event was played at Nedlands a couple weeks later. Club Championships were then held over the course of a couple weeks in August, seeing Peter Heinrich come out on top. The season finished with the 2021 WA Blind Golf Open in September with winner Maureen Crawford enjoying a great day at Wembley with her husband and caddie Jim.

The WA Golf Foundation looks forward to it’s continued support of the WA Blind Golf Association in the future.

If you would like to learn more about the program, head to www.wabga.org.au