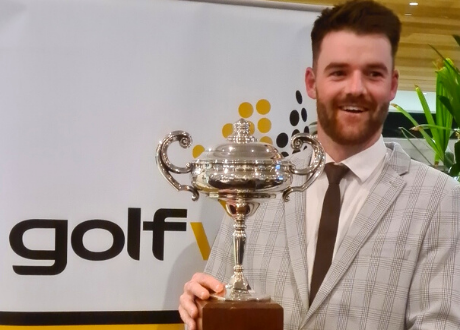 Haydn Barron (West Australian GC) and Kirsten Rudgeley (Mount Lawley GC) have ended the season on a high, securing the Ivie Temperley and Paxton Averages titles for the 2020/21.

Rudgeley has had an outstanding season, averaging 67.73 strokes to win the prestigious award for the fourth time in the last five years. After an impressive start at the Nexus Risk WA Open, Kirsten headed interstate to secure wins and the 2020 Port Phillip Open and the 2020 Victorian Amateur Title.

Rudgeley went on to win the 2021 North Shore Classic in New Zealand, and was runner up in the 2021 Australian Amateur. She confidently won the South Australian Amateur Classic and was awarded the prestigious 2021 Karrie Webb Scholarship after her consistent high level performance.

This boost was clearly all Kirsten needed to raise her game to the next level, heading to the United Kingdom to challenge herself against some of the worlds best amateurs.

Within a matter of weeks, Kirsten won the 2021 Helen Holm Women’s Scottish Amateur Open, then topped that winning the 2021 English Amateur Championship in a gruelling seven rounds in five days.

Kirsten is currently ranked number 1 on the Australian Women’s Order of Merit and has a world ranking of 79.

Haydn Barron averaged 69.25 strokes over 29 rounds to win the Roy Paxton average award for his second consecutive year. Barron got the season off to an impressive start, runner up in the Nexus Risk WA Open.

Barron challenged himself against the West Australian professional field competing in the TX Civil and Logistics WA PGA Championships, and won his first ever pro event at the 2021 Spalding Park Open. Haydn is currently ranked #8 on the Australian Men’s Order of Merit and has a world ranking of 146.

Congratulations Haydn and Kirsten on your incredible achievements this year. These, coupled with your tremendous sportsmanship, grace and determination make you shining examples for WA’s Amateur golfing community.

The Annual Golf Day and Dinner Trophy, the Hastings Reid Cup was won by Kim Hayman, Willie Jordaan, Neil Bailey and Idris Evans from WA Golf Club, who will enjoy the trophy until next year.